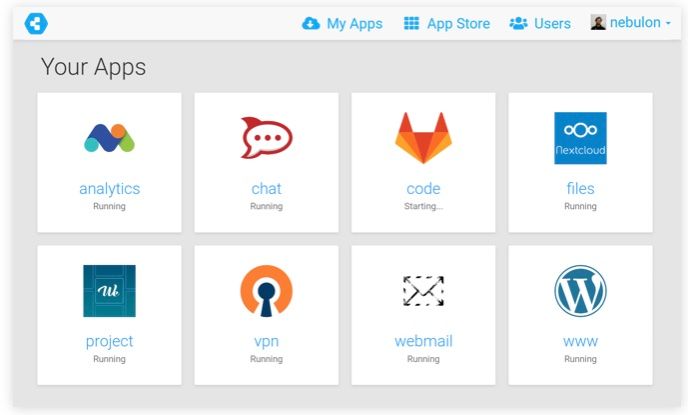 I love OSS - there's literally an app for everything. Seriously - the GitHubs are alive with the sound of free software. I also "like" containers in that I don't have to install things and mess up my precious server - it's like containers CONTAIN things into a single file that I can just whack if I get tired of it. But I'm not GOOD at containers. It's complicated, even though I've been doing VMs since Hyper-V server 2005. But, for the previous two or three years, I've been a HUGE fan of a service called Cloudron.io because they created a system that makes managing, backing up, restoring, securing, etc. of containers an absolute snap! A reminder - I don't do paid placements, so this is just me raving about all the base.

The most fun about running a Cloudron is the community that is behind it. The team consists of the people that make the software and earn money. And they do a fantastic job. But, for the low low cost of offering to package an app that makes it into their rapidly growing collection of packaged apps, you get to run a Cloudron for too. And the apps are amazing! Things I use most often for my itty bitty teeny weenie business (and the family tech stack here at the house) include:

In fact, I even run it as a teeny weenie business where you can pay me a few cups of iced tea and I'll host this stuff for you at https://www.thedoodleproject.com

So many things to make you more secure and less dependent on the big boys. Google Docs? Nah, NextCloud. Twitter? Necessary evil, but Mastodon is better. Facebook? bleh, how about PixelFed. Etc. But how do those things get from OSS apps on GitHub into the store? Well, I've become a HUGE fan of that community as I said and we collectively help package up new apps for the Cloudron store.

The best thing about Cloudron is all the amazing things I don't have to worry about: app updates, backups, restores, security via LDAP, groups, email, SSL certs, reverse proxies, the list is quite long.

Currently, I'm working on these apps which are in various states of completion:

Last week, I even hosted Cloudron's first app packaging event - using two of my own apps - PeerTube and Matrix. PeerTube is like YouTube, but uses a federated torrent/fediverse protocol so that one creates a "mesh" of distributed videos. It can also host Live Streams (new in the latest release which happened to all Cloudrons worldwide within like two hours of the OSS author publishing it). And Matrix is a federated, secure, etc. chat protocol. It's pretty heavy but lots of folks use it so it was fun to bring them two together.

It was really easy too. I just set up PeerTube and configured it, and then downloaded a free OSS app called OBS and configured it to hit my PeerTube RTMP port. Tinker around with Scenes and Sources later - bam, up and running. It's really amazing what you can do with this stuff. Anyways, have some Cloudron, or pay me to Cloudron things for you.